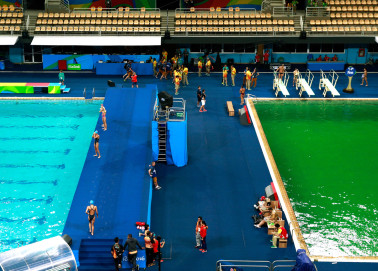 Pool water quality isn’t often a topic of discussion you see in the mainstream media but it took the front seat during the Rio Olympics this summer. On Tuesday Aug 9 the 3,725,000 Liter dive pool took the ‘going green’ movement very literally.

As with any current events news topic, the facts were inconsistent at best. Speculation ensued from pool experts everywhere. Sources closer to the event also had some varied explanations. ESPN reported a Rio spokesman explaining it was a “proliferation of algae.”1 FINA offered their own chemistry backed explanation “pH level of the water was outside the usual range.”2 A later statement from the Rio organizers pointed to “a sudden change in alkalinity.”3 A more recent theory was related to hydrogen peroxide being dumped into the pool.4  As any experienced pool operator knows, this sort of problem can be time consuming and frustrating to troubleshoot regardless if we’re talking about an Olympic pool or a small hotel hot tub. Our company has had the privilege of being involved in many water quality problems over the years. The knowledge we’ve acquired from +30 years of solving pool problems has lead us to form a very practical approach to water quality troubleshooting.

Water clarity is always the first thing I notice in a pool, regardless of the color. It’s becoming more common to see operators have inline turbidimeters or portable test kits on hand so that a record of quantifiable clarity measurement (nethelometric turbidity units, or NTU’s) can be maintained. Small changes in the NTU value can warn of deteriorating water quality before a visible problem is detected. Part of the problem with identifying clarity issues is most pools don’t have a good depth of water to properly evaluate clarity and it’s not known how long a problem has actually been developing. Clarity can easily be taken for granted as being ‘ok’ or ‘good enough’. From a safety perspective, it is obvious to want the water to be sufficiently clear so that a distressed or drowned swimmer can be seen. Extreme cases in cloudy water can certainly cause safety and supervision problems but more minor water clarity problems can be the source or symptom of several undesirable issues requiring corrective action. When your pool becomes cloudy to the point that someone notices even a slight murkiness, it should be regarded as an indicator of a deficiency in the pool water treatment process.

If a turbiditmeter isn’t a practical option to have, using a handheld mirror held just below the surface to observe across the length of the pool is a great tool to gauge clarity. Look for a tile marking/pool fitting/ladder etc. as a marker for how far you can see. The farther the distance you look the better the indicator of clarity. Make a habit of doing this daily, try it first thing in the morning and after a busy swim to get a feel for how the water quality changes with varying bather loads. This can also be used as a tool for when to dose a filter aid/flocculent and evaluate other treatment tools.

Persistent clarity issues can also be attributed to a filter performance issue (media condition/filtration speed/equipment failure/valve problem) which can compound with ineffective oxidation (using chlorine alone to disinfect and oxidize bather waste).  In summary, clarity should be the priority. Water clarity is one of the best tools for water quality and should be an operator’s priority. If you wouldn’t eat in a dirty restaurant, why would you swim in a cloudy pool? Clear discoloured water isn’t as much of a concern to me, if the water chemistry is satisfactory there is no reason to worry about the bathers.

In my experience, the most common cause of clear green water is the oxidation of a dissolved metal, such as iron or copper. Too much copper can be the result of overdosing a copper based algaecide, high source water levels or corrosion of copper equipment in the system (such as a heat exchanger).  Iron isn’t as commonly tested for but the problem with iron testing is the iron is not be dissolved as elementary iron in pool water due to the oxidation from chlorine, instead it is dissolved as an Iron(III) complex after being oxidized. This is why it may not detectable with normal iron testing as found in many photometers. The source of iron can be from source water, corrosion of cast iron pool equipment or iron being released from some types of carbon based filter media. The release from media is the result of a corrosive water reaction from low alkalinity and/or low pH inside the filter tank.

Part of the solution involves taking all the pool specific factors into consideration and doing some detective work. The trouble with trying to understand the Rio pool problems is we don’t know anything about their operation. The regulations and standard practices for running pools can vary from country to country. For example, our colleagues in Austria & Switzerland must maintain free chlorine levels at 0.2 – 0.6 ppm as it’s generally accepted that higher levels of chlorine create unhealthy pool air (they can get away with this because they have very high standards for filtration and circulation). I don’t know anything about what is being used for filtration and sanitizing chemicals at the Rio Olympic pools so I am going to withhold from throwing another theory out there. If you have a clarity/colour problem that is persistent or have an interest in perusing technologies that provide better water quality with less chlorine, please don’t hesitate to contact us.